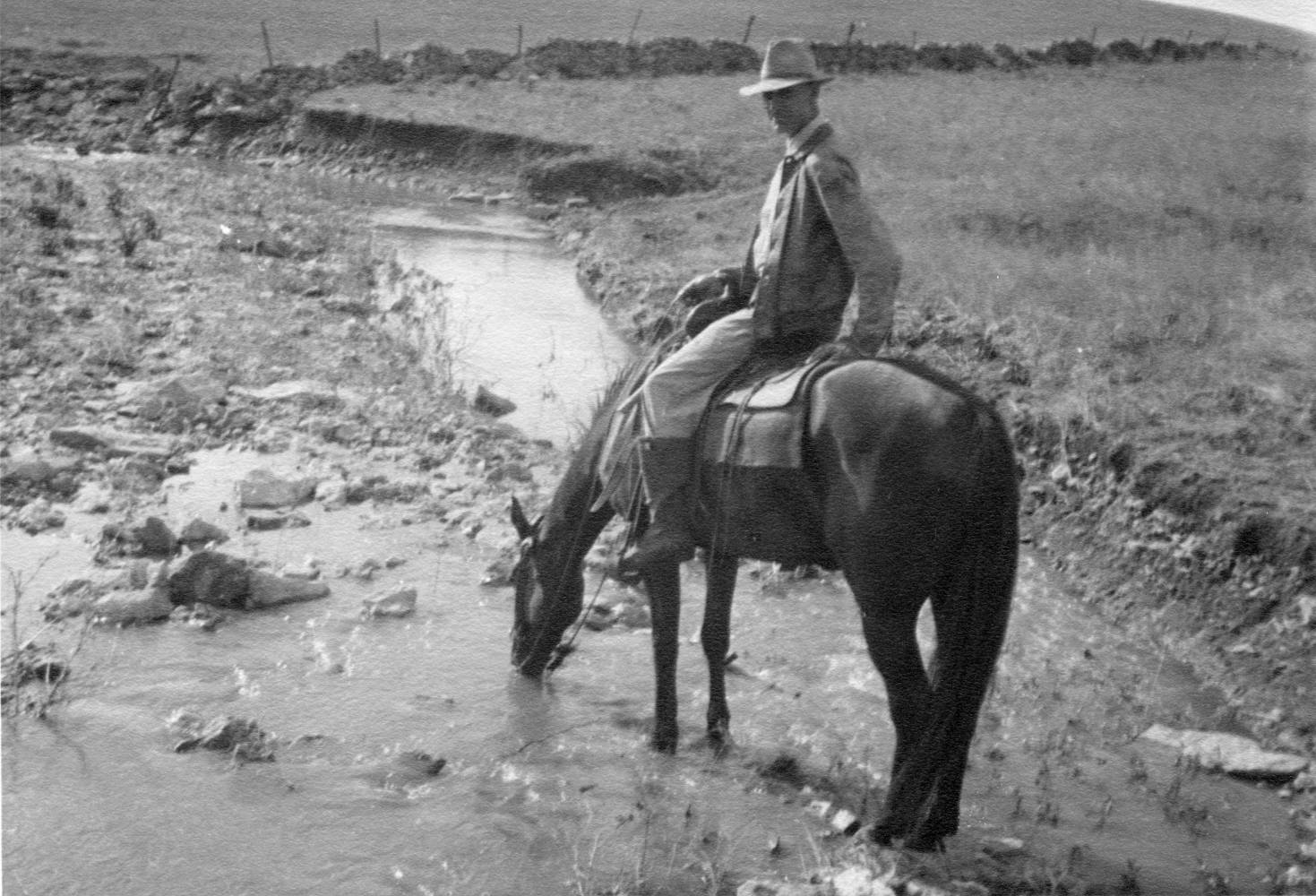 A Brief History Of The Merrill Ranch in Comanche County, K

The Merrill Ranch is located in the southeast part of Comanche Count approximately 130 miles south-west of Wichita. The Salt Fork of the Arkansas River runs through it from west to east. Several other waterways – the Red Fork of the Arkansas. Mule Creek, Indian Creek, & Owl Creek, Newcomb Creek, and numerous springs and developed ponds supply water. It is home to and employs three families full-time. It is approximately 17,320 acres. Of this about 1,916 acres is farm ground, with the balance in grass, etc

The main crops are wheat as a cash crop, and sorghum to make bales tfeed to the cattle in the winter. We do all our own farming except whire custom cutters for the wheat harvest. The cattle operation is commercial cow-calf operation. We run approximately 900 cows, 10replacement heifers, and 45 bulls, and calve the cows beginning iFebruary each year. The calves are sold in late October. Extra help ihired during roundups each year. (We are in the process of converting from a Hereford cattle operation to an Angus cattle operation.

According to historians, prior to the arrival of the white man isouth-central Kansas, no group of people had established permanensettlement in the area that was later to become the Merrill Ranch. Thfive Plains Indian tribes, Comanche, Kiowa, Arapaho, Cheyenne, anApache, had used the area as a seasonal hunting ground, following thmigration of the great herds of bison

In the 1860’s, white hunters and trappers began to establish temporarliving quarters in the area. A few explorers, “stragglers” and freed oescaped slaves from the Civil War, people looking for alternate trailto New Mexico and California, cavalry groups, and cowboys driving Texacattle through the area heading on north passed through various parts othe area. Later buffalo hunters, then freighters (those who carried outhe hides and the bones of the dead buffalo) began to frequent the areaMen seeking to cut cedar posts for fences appeared, cutting the cedargrowing in the deep canyons and freighting them east (the remains of cedar post camp is still evident on the Ranch). About 1868 (by then thbuffalo had been extinguished from the area and the Indians were not threat), a few ranchers and farmers began to settle in this area. Mosof those who stayed were cowmen who pastured their herds on the publilands, paying neither taxes nor rent. Their unwritten laws served tapportion among themselves the grasslands, whose borders were fixed bnatural landmarks and mutual consent

Jesse Evans began running cattle in this area as early as 1870. In 188the Comanche Pool was established by Evans, Hunter, & Colcord. Icovered over a million acres including all of the present Merrill RanchThere were 17 charter members, with the working headquarters locatewhere the Merrill Ranch headquarters are located today. In the earlyears it was highly successful, but a series of setbacks including twdevastating winters on an overstocked range, the murder of the treasurer of the Comanche Pool in Medicine Lodge, low market prices focattle, the settlers moving in, the government encouraging land settlement, and the development of roads into the area determined its demise in 1885

After the Comanche Pool was dissolved, the headquarters remained as thsmall town of Evansville, becoming a supply point for settlers movinin. At that time it was titled to Wesley Grant of Boston. Around 190Mortimer R. Platt gained control. He sold it to John Arrington i1918. In the early 30’s Mr. Arrington lost it to the mortgage company

Beginning in 1934 (George) Davis, (Harold) Merrill, and (Nicholas) Nolan Grain Company of Kansas City, purchased about 43,000 acres in Comanche and Barber County, and another 27,000 acres in the Flint Hills. (Harold Merrill’s association with George Davis as an “office boy” at age 10!) (I don’t know when Nolan disappeared in the partnership.) In 1945-46 the two remaining partners in the grain business, Davis and Merrill, split their holdings with Davis taking the Barber County land, and Merrill the Comanche County holdings, then to be known as the Merrill Ranch. The property in the Strong City area was also split with Davis taking the property on the west side of the road (current Z-Bar Spring Hill Ranch) and Merrill taking the property on the east side (managed by Kenneth Logston – now Mashed O Ranch). After Mr. Merrill’s death in 1965, his holdings were placed in a Trust managed by Commerce Bank of Kansas City

Virgil and Mildred Scherich went to work for Orville Alley on the DaviRanch in Barber County shortly after they were married in 1937. In 194Virgil and Mildred and sons Henry and Larry (also known as Dee) moved tthe present Merrill Ranch in Comanche County. In 1946 Virgil replaceLester Alley as working manager, under the supervision of J. P. Lynuntil Mr. Lynn’s retirement about 1960. Many miles of terraceand waterways were constructed and several ponds and pits for waterincattle were dug. Most of these are still in good repair and in use today

Virgil then worked directly with H.A. until Mr. Merrill’s death in 1965During this time the Merrill Ranch received the Comanche CountConservation award for terracing the farm ground.

Dee remembers his dad telling of one humorous incident with Mr. Merrilduring this time. They were in a pasture augering to see how closcattle water was to the surface. Mr. Merrill was typically dressed ihis suit. A log was lying behind him, and as he was intently watchinVirgil dig for water he inadvertently stepped back, fell over the lobackwards, and landed on his ___! After Virgil helped him updusted him off, and made sure he was all right, they determined therwas not a sufficient water supply in that location and continued theisearch. During the time Virgil & Mr. Merrill were scouring the ranclooking for water sources, Mildred & Mrs. Merrill were fixing lunch anenjoying one another’s company. A warm and lasting mutual friendshiresulted. Mr. & Mrs. Merrill thoroughly enjoyed their time here, as MrMerrill indicated many times that this was their favorite propertyAfter Mr. Merrill’s death, Mrs. Merrill continued to visit for manyears, bringing friends with her to see “her” ranch

During this era the first mineral leases on the ranch were negotiatedand the first wells were drilled. Mr. Merrill was instrumental iordering the first 4-wheel drive pickup – desperately needed to navigattrails during muddy weather and to cross the Salt Fork River. Durintheir visits the Merrills saw the need to improve housing for employeesIndoor bathrooms, additional living space, air conditioning, carpetingand even a dishwasher (for Mildred) made life for employees morenjoyable

Larry (Dee) & I and our sons, Kevin, Doug, and Steve moved to the ranch tassume management in 1976 when Virgil was 71 years old. Virgil & Mildreremained on the ranch actively working until their deaths in 1986 an1995 at ages 68 and 90

Since we have been here, improvements have continued. Our home was builin 1976, the barn and machine shed at headquarters were replaced i1980, the tile shed at the East Place was torn down and replaced, th“boxcars” were refurbished by totally covering with tin, and the calvinshed re-roofed. Many changes and additions have also taken place in thcattle working facilities. Maintenance and upgrading on the homes icontinued as prudent finances allow

At the time we were approached about moving to the ranch Dee wateaching science at Inman High School. We agreed to commit to eighyears at the Ranch at which time our children would all be out of higschool. It is evident that the lifestyle and the confidence the MerrilRanch and Trust has placed in us has agreed with us as we are still her25 years later

The ranch is operated as part of the Harold A. Merrill Trust and the Catherin Merrill Trust. Dee is still the manager

A major job is cutting and burning the invasive eastern red cedar trees. We have two Bobcats with saws for this endeavor. We also have a “knock-down” fire truck and other water tanks and fire control mechanisms to assist in controlling the burns

We still use horses, but have added 3 four-wheelers (RTVs)

We carry FM radios (or have them in the pickups) to communicate at all times. We do not have reliable cell phone service in our area